September 18, 2018
If you are only interested in my tech blog, then skip this one. It's a personal story.

A few weeks before I left the US for Denmark in the summer of 2016, I hit the highest weight I've ever been and a BMI of 37.4. I still thought I was pretty healthy though. After all, I was walking 5 miles (8 km) a couple times a week and biking 5 miles (8 km) to/from work once a week. 🤦‍♀️

Although there are no full body pictures from that time, I do have a picture from my first few days in Denmark(red shirt/left). I distinctly remember trying on several outfits that morning and those were the only pair of shorts I had that fit. And by this point, I'd already lost 5 pounds (2.25 kg) during the move. 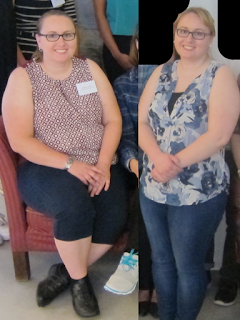 Moving to Denmark and living on a very strict student budget meant making some major changes to my life. I no longer had a car to drive everywhere. I had to walk to/from public transportation. I no longer had money for restaurants and fast food and had to buy my own groceries to cook.  About a month in, I got a bike and was exercising much more frequently.  So in the first 3 months in Denmark, I dropped weight very quickly. I lost 25 pounds (11.3 kg) and got down to a BMI of 33. After that though, my weight loss stagnated. When winter came, I wasn't exercising as much. I was craving junk food again and found ways to get it in my budget. By May (blue shirt/right), I had regained about 5 pounds (2.26 kg).

And my weight stayed there for much of the next year. When I moved to Berlin, I found much cheaper food and so many new things I hadn't tried yet. I had a real job again and could afford to go out to restaurants. Luckily though, I was at least exercising enough to keep from gaining any more weight.

Then, this spring something changed. During the winter months, I had some major health problems. I kept getting sick, went to my family doctor almost weekly, and saw some specialists. They couldn't find anything wrong. The orthopedist said my back pain wasn't structural, I just had weak muscles.  Similarly, other specialists ran so many blood tests and found nothing out of the ordinary... They kept telling me to just lose weight and I would feel better.

I was frustrated because when I tried, nothing would happen. I had intense back and foot pain so I couldn't play sports, so I tried to increase my walking distance. That still wasn't changing my weight though. I had trouble breathing and when the elevator went out at work, it was a struggle to go up the three flights of stairs every day.

Then, in late July/early August, Berlin had a major heatwave. I may have grown up in the South, but I have lived in relatively cold places for the last 12 years. I really cannot do heat anymore. It was so hot my air conditioning couldn't keep up and I felt too sick to eat. For the next few weeks, I drastically changed my diet. In order to deal with the heat, I stopped eating heavy carbs and reduced my meat intake. After eating like that for a few days, I stopped craving many of the bad things that had wrecked previous diets. It took a few weeks to start noticing the change, but eventually, it happened. I lost 5 pounds (2.26 kg), then 10 (4.5kg)! Then the diet changes were at their max and I knew I needed to kick it up a notch.

I started to feel a little better in my exercise routine and started adding some running at the end of my walks. I was looking for the next step to get into better shape and strengthen my muscles again.

Free copy of my Java Design Patterns Course if you complete a daily mile run outside each day over the next 40 days. Must be GPS tracked and on Endomondo. Starting 10th August and finishing 18th September. https://t.co/jaIy1OH0yQ
— Heinz Kabutz (@heinzkabutz) August 9, 2018

The timing was absolutely perfect.  I didn't really need the course, and I wasn't sure if I could do 1 mile every day, but I would try to do as much as I could for the exercise.  I also felt like having a group doing it together would help with my motivation.

I've been out of shape pretty much since the middle of university nearly 10 years ago. I looked a bit different then:

so I wasn't sure how running at this weight would work out. Spoiler Alert: I feel so much better!

The first day was tough. It was a Friday and I'd been out drinking with some ex-colleagues. I didn't get home until late, but I got my running clothes on and went out running anyway.  I was slow and had to stop a few times because my shoes kept coming untied (🤦‍♀️). Less than an hour from midnight, I finished the first mile (1.61 km) I'd run in years in 12 minutes 4 seconds.

The second day, I got up in the morning and went out thinking it would be easier. Boy, was I wrong!  I tried to push myself to go a little faster, but with the heat and heavy humidity, I was left gasping for air.  About halfway through, I had to slow down significantly to catch my breath. At about the 1km mark, I was about to give up.  Just then, my music paused and over my headphones came a message from the organizer of the challenge encouraging me to keep going. At first, I was a little angry because I really don't like being called Jenny, but that just motivated me to run faster. In the end, I'm grateful because it helped me finish those first few runs knowing other people were watching.

I added a few more "friends" who were also in the challenge and I saw other women running too. It was especially encouraging to see I wasn't alone in being a slow runner.

My times over the next week didn't get any better, but I did get better at running continuously and without running out of breath. By the end of the first week, I was starting to run more than a mile. :)

By the beginning of the second week, I was starting to run more than a mile per day.  So on Saturday, I decided to push myself to run 2 miles (3.2 km). I did and it felt great... until the next day. For Sunday's run, my legs were hurting, but I powered through and broke my mile time getting under 11 minutes for the first time. As soon as I stopped running though, my legs were shot. I couldn't even walk. I had to stop for a bit and cool down. After walking for a bit, I thought I could try running again since I had to get back home anyway. I turned on the tracker, but as soon as I started running again the pain became incredible. After a few minutes, I had to stop again and slowly limped back home.

For the rest of the week, I was in so much pain during the day.  During my runs, I slowed down to a slow jogging pace and only ran the minimum 1 mile. If it wasn't for Helena and Esther who have been incredibly supportive throughout this challenge, I don't think I would have continued. Knowing we were in this together helped me go out even late at night sometimes just to get that 1.0-mile run done.

Then some time passed

After running the minimum for a while, the pain started to get better.  By the fourth week of the challenge, I started going longer and longer distances again. After my painful experience in the beginning, I decided to keep to the rule of 10% and didn't go up that much at one time.  This was also the first time that I really noticed I was losing weight.  One day I was so shocked, I snapped this pic in the reflection of the building door. Since the beginning of the challenge, I was down almost 10 pounds (4.5 kg). 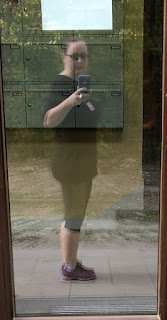 After doing pretty well for a few days, I started a training plan in the app and one of my runs ended up at 2.7 miles (4.3km) nonstop. Unfortunately, just as I was really getting going on my longer runs, I came down with a bad cold. One day it was raining and I was so congested I could barely breathe, but we were so close to the end so I powered through. I kept running the minimum 1 mile and eventually made it to day 40.

It took a lot out of me, but on the very last day of the @heinzkabutz 40 day running challenge, I finally ran a mile under 10 minutes(9:49)!! I don’t think I’ve done that in maybe 10 years. I will follow up with a blog post of my entire fitness journey later today. pic.twitter.com/ceQmSuIbau
— Jenn Strater (@codeJENNerator) September 18, 2018

On previous runs, I had gotten close but never quite broke the 10-minute mile mark. So before my last run, I ate a good meal, took a pain reliever1, and used my inhaler (I've been struggling a bit with asthma during this bronchitis episode).

But that's not the only record I made this week. For the first time in 5 years, I'm no longer clinically obese. I still have a ways to go before my final weight loss goal, but it's a major milestone to finally get to a BMI of 29 (overweight, but not obese!).

I still have really bad bronchitis and asthma symptoms so I think I'll take tomorrow off and let my lungs heal. I hope to be back running outside by the end of the week though and back on my 5K training plan.  The weather in Berlin has been great for running, but when winter inevitably comes, I might actually have to join the local gym to take my workouts to the next level. :)

1Disclaimer: You should never take painkillers for your leg pain before a run. It can interfere with the body's ability to sense injury.  I took the medication recommended by my doctor to reduce the fever and sinus inflammation associated with my cold.
not tech